Professional footballers have worryingly poor teeth that could be affecting their performance on the pitch, say dentists.

Their study on players at eight clubs in England and Wales, in the British Journal of Sports Medicine, showed nearly four out of 10 had cavities.

The dentists, from the International Centre for Evidence-Based Oral Health at University College London, examined 187 players’ sets of teeth.

They found 53% had dental erosion, 45% were bothered by the state of their teeth and 7% said it affected their ability to train or play.

Around 40% had tooth decay, compared with 30% of people of a similar age in the general population.

Prof Ian Needleman, one of the researchers: “These are individuals who otherwise invest so much in themselves so it’s a surprising finding. There are two main groups – some have a catastrophic effect, they have very severe abscesses that stop them in their tracks and they cannot play or train.”

“There’ll be others experiencing pain affecting sleeping or sensitivity every time they take a drink. At this level of athlete, even small differences can be quite telling.”

Nutrition is one of the primary suspects with frequent consumption of sugary or acidic foods during training potentially accounting for tooth decay and erosion.

A lot of air in the mouth during exercise can also dry it out so there is less protection from saliva.

Prof Needleman said that while “these findings are worrying” clubs were giving dental health a “higher priority” and were educating their players.

The teeth of athletes at London 2012 were broadly in the same state as those of footballers.

Stijn Vandenbroucke, the head of medicine and sports science at West Ham, said there were “clear preventive benefits for athletes and club”.

He added: “Oral health is an area where many athletes have greater problems than the general population so it has been a massive achievement for so many professional football clubs to collaborate with each other to help us understand the scale of this problem better.” 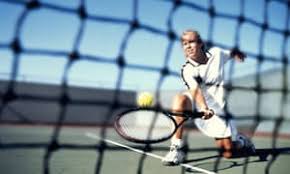 Research indicates regular badminton and tennis are sports most protective to health, while football and running are bottom of the table
Female tennis player
Not keen on racquet sports? Donít despair: the authors stress that all types of physical activity are beneficial to health.

If you want to stave off death for as long as possible, you might want to reach for a tennis racquet.

Scientists attempting to tease apart the benefits of different sports have found that regularly taking part in sports such as badminton or tennis reduces your risk of death at any given age by almost 50%, with swimming and aerobics also proving protective.

By contrast, running and football appeared to have little effect, although the authors caution that this could be down to the nature of the study itself.

It is the first big scale population study to say ‘is participation in sport protective in terms of your long-term mortality?’ The answer is yes, it does appear to be , However, which sport you choose may make a difference.

Published in the British Journal of Sports Medicine by an international team of researchers, the study incorporated responses from 80,306 adults aged 30 and over in England and Scotland who were quizzed on their health and exercise through national surveys conducted at various points between 1994 and 2008.

Each participant was asked a series of questions about their lifestyle and exercise, including which sports they had taken part in during the previous four weeks and how frequently they did so, as well as the intensity of the exercise and its duration.

The survival of the participants was surveyed, on average, nine years later, during which time 8,790 participants had died, with 1,909 deaths down to cardiovascular disease.

The results reveal that fewer than half of the participants, just over 44%, met the national guidelines for the recommended levels of exercise of 150 minutes of moderate physical activity a week.

The researchers then compared the risk of death among those who took part in a sport to those who did not participate in that particular activity, taking into account factors such as age, sex, whether they smoked, BMI, other exercise and education.

The results revealed that cycling, for example, was associated with a 15% reduced risk of death. ìWe can tease out specifically that little extra difference between those who do cycle and those who donít,î said Foster.

When the team looked just at the risk of death from cardiovascular disease, they found that swimming reduced the risk by 41%, racquet sports by 56% and aerobics by 36%. Running, cycling and football showed no protective effect.

But those who run or enjoy football shouldnít hang up their trainers, he adds. The researchers are 100% certain that they know participation in these sports is good for you, that is very clear, but what they haven’t seen yet is how well those benefits translate over the long-term into preventing death.

Among them, there were very few deaths among runners and footballers, the number of footballers was small and it was possible that runners over-reported the time they spent pounding the road.

Ulf Ekelund, a physical activity epidemiologist at the University of Cambridge and professor in physical activity and health at the Norwegian School of Sport Sciences, in Oslo, said the key message from the research was not that one activity was more likely to stave off death than another, but that sport in general is beneficial.

There is so much evidence that physical activity, including sports participation and all kinds of exercises, are associated with a reduced risk of both non-communicable diseases and the risk of death.

Getting in shape shouldn’t be a chore.

In fact, there are many easy ways to incorporate exercise into your everyday activities or focus on things you already love to do.
If you’re busy, don’t let it stop you. Try and fit more activity into the things you already do every day – whether at home or at work:

Choose the stairs. Youíll get a workout and avoid the awkward elevator rides. For a more strenuous workout, go up and down the stairs for 15 minutes.
Park farther away. Running errands, at work or dropping off kids, park as far away as you can to add a few more steps into your day.
Take walking breaks. Leave your desk occasionally to take a break to walk outside when the weatherís nice or stay inside and explore different areas of the building. This will give you a little stress break and let your eyes rest after staring at a computer screen. Also, it will add in a few more steps and youíll feel more rejuvenated when you get back to your desk.

Maybe you enjoy rollerblading, perfecting your garden or snow skiing with your kids. When you enjoy exercise, youíre more likely to keep it up. You might want to try:

And if you have some setbacks, thatís OK. In the end, youíll see success if you stay consistent.

4. Plan for the Long Haul

Doctors recommend exercising for 30 minutes at least five times a week at a moderate level of activity (like gardening or walking). If that sounds overwhelming, build on small goals month-by-month.

What else is going to help you reach your goals? Stay patient and positive until you get there ñ and you will get there.

Life changes are much easier to manage with a group of close friends and family supporting you. If you know someone whoís already active, ask them for tips or be brave and join them! In the end, it doesnít really matter how you exercise, whatës most important is finding a way to exercise doing what you love and making it a part of your daily routine.

High-intensity training (HIIT) has become popular with athletes and amateurs and now scientists know why. 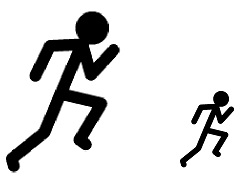 Short bouts of intense exercise could be the key to staying in shape after researchers found that even just a few minutes of strenuous activity can make muscles work harder.

High-intensity interval training (HIIT) has become popular with athletes and amateurs and has clear visible benefits.

But sports scientists have always struggled to understand how a short amount of activity can produce similar effects as endurance training.

Now, researchers at the Karonlinska Institute in Sweden have found that even small levels of intensive exercise boost the production of mitochondriañ the cellís batteries ñ which enhance muscle endurance.

Volunteers who cycled for 30 seconds as fast as possible, six times, triggered the effect, suggesting just a few minutes is all it takes for results to begin to show. Tissue samples of their muscles showed benefits.

ìThis causes a lasting change in how the cells handle calcium, and is an excellent signal for adaptation, such as the formation of new mitochondria.î

Can 20 seconds of high intensity exercise really beat a session in the gym?

Mitochondria are like the cellís power plants, and changes that stimulate the formation of new mitochondria increase muscle endurance.

However the researchers also found that anti-oxidants like vitamin E and C can stop the effect.

ìOur study shows that antioxidants remove the effect on the calcium channels, which might explain why they can weaken muscular response to training,î added Professor Westerblad.

The study was published in the journal PNAS.