‘Healthiest hearts in the world’ found 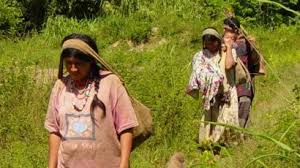 The healthiest hearts in the world have been found in the Tsimane people in the forests of Bolivia, say researchers.

Barely any Tsimane had signs of clogged up arteries – even well into old age – a study in the Lancet showed.

It’s an incredible population with radically different diets and ways of living, said the researchers.

They admit the rest of the world cannot revert to a hunter-gathering and early farming existence, but said there were lessons for all of us.

There are around 16,000 Tsimane who hunt, fish and farm on the Maniqui River in the Amazon rainforest in the Bolivian lowlands.

Their way of life has similarities to human civilisation thousands of years ago.

It took the team of scientists and doctors multiple flights and a canoe journey to get there.
How does your diet compare with the Tsimane?
Image copyright Michael Gurven

17% of their diet is game including wild pig, tapir and capybara (the world’s largest rodent)
7% is freshwater fish including piranha and catfish
Most of the rest comes from family farms growing rice, maize, manioc root (like sweet potato) and plantains (similar to banana)
It is topped up with foraged fruit and nuts

How fit are they?

They are also far more physically active with the men averaging 17,000 steps a day and the women 16,000.

It makes most people’s struggle to get near 10,000 seem deeply insignificant.

They achieve a remarkable dose of exercise.
So how magnificent are their hearts?

The scientists looked for coronary artery calcium or “CAC” – which is a sign of clogged up blood vessels and risk of a heart attack.

The scientists scanned 705 people’s hearts in a CT scanner after teaming up with a research group scanning mummified bodies.

At the age of 45, almost no Tsimane had CAC in their arteries while 25% of Americans do.

By the time they reach age 75, two-thirds of Tsimane are CAC-free compared with the overwhelming majority of Americans (80%) having signs of CAC.

The researchers have been studying this group for a long time so it is not simply a case of the unhealthy Tsimane dying young.

It is much lower than in every other population where data exists. The closest were Japanese women, but it’s still a different ballpark altogether.

Is it only diet and exercise?

They also smoke a lot less, but they do get more infections which could potentially increase the risk of heart problems by causing inflammation in the body.

One idea is that intestinal worms – which dampen immune reactions – could be more common and this may help protect the heart.

What can I learn?

It is clear that we need a more holistic approach to physical exercise rather than just at the weekend.

Bicycle to work, take the stairs, write your story on a treadmill desk.

It could be to maintain health we need to be exercising much more than we do.

The modern world is keeping us alive, but urbanisation and the specialisation of the labour force could be new risk factors

They also live in small communities, life is very social and they maintain a positive outlook.

What do experts make of all this?

The Tsimane get 72% of their energy from carbohydrates.

The fact that they have the best indicators of cardiovascular health ever reported is the exact opposite to many recent suggestions that carbohydrates are unhealthy.

This is a beautiful real life study which reaffirms all we understand about preventing heart disease.

Simply put, eating a healthy diet very low in saturated fat and full of unprocessed products, not smoking and being active life long, is associated with the lowest risk of having furring up of blood vessels.

Three quarters of people are unaware being overweight increases the risk of developing 10 different types of cancer – Cancer Research UK.

It said the lack of understanding was “concerning” and criticised the government for its failed attempt to tackle childhood obesity.

Bowel, kidney, breast and womb cancer are most commonly linked to obesity.

Public Health England said it was working with the food industry to reduce sugar in its products.

There is evidence to show that carrying too much weight increases the risk of developing cancers, contributing to more than 18,000 cases of cancer each year in the UK.

Cancer Research UK said its online survey of more than 3,000 people across the UK indicated the message about the health risks of being overweight had not got through to the general public.

Fewer than one third knew of the link between obesity and breast or womb cancer, and more than half did not know pancreatic cancer was linked to obesity.

Research suggests 40% of womb cancers are linked to obesity.

However, there was better awareness of the link with bowel cancer and kidney cancer.

Number of cancer cases linked to being overweight or obese in the UK each year:

With a quarter of adults in the UK being obese – defined as a BMI or body mass index of over 30 – and about 60% classified as overweight or obese – a BMI over 25 – eating a healthy balanced diet and taking regular exercise is key to helping people lose weight.

CRUK has 10 top tips for a healthy weight, which include eating smaller portions of food and choosing water to drink instead of sweetened juices or alcohol.
Image copyright Thinkstock

Cancer Research UK said making the public more aware of the link between obesity and cancer was the government’s responsibility and it should start by focusing on the health of the nation’s children.

The latest figures show that one in five children starts primary school overweight or obese, and, at the age of 11, one in three are in this category.

Dr Alison Tedstone, chief nutritionist at Public Health England, said it had launched a programme to get the food industry to remove at least 20% of the sugar in their products by 2020.

“The link between obesity and cancer shows just how important it is to cut back on calories, sugar and saturated fat to maintain a healthy weight,” she said.

There are many possible factors that contribute to cancer risk include family history, age and lifestyle.

The link between obesity and cancer is still not completely clear, but there are three main theories: