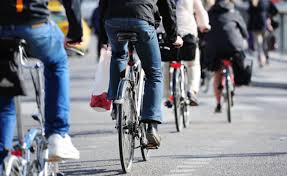 Want to live longer? Reduce your risk of cancer? And heart disease? Then cycle to work, say scientists.

The biggest study into the issue linked using two wheels with a halving of the risk of cancer and heart disease.

The five-year study of 250,000 UK commuters also showed walking had some benefits over sitting on public transport or taking the car.

The team in Glasgow said cycling took no willpower once it became part of the work routine – unlike going to the gym.

The five-year study compared people who had an “active” commute with those who were mostly stationary.

But, during the course of the study, regular cycling cut the risk of death from any cause by 41%, the incidence of cancer by 45% and heart disease by 46%.

The cyclists clocked an average of 30 miles per week, but the further they cycled the greater the health boon.

Walking cut the odds of developing heart disease but the benefit was mostly for people walking more than six miles per week.

This is really clear evidence that people who commute in an active way, particularly by cycling, were at lower risk.

Why cycling is a healthy option

Should cycling be allowed on pavements?

You need to get to work every day so if you built cycling into the day it essentially takes willpower out of the equation.

The way the study, published in the British Medical Journal, was carried out means it is not possible to determine a clear cause and effect.

However, the effect was still there even after adjusting the statistics to remove the effects of other potential explanations like smoking, diet or how heavy people are.

It means the reason cycling cuts cancer risk cannot be down to weight loss in the study.

Other explanations include cyclists being leaner (even if they are not weighing any less) and lower levels of inflammation in the body.

Cycling is thought to be better than walking as the exercise is both longer and more intense.

Find out how to get into cycling with our special guide.

This study helps to highlight the potential benefits of building activity into your everyday life. You don’t need to join a gym or run the marathon. Anything that gets you a bit hot and out of breath – whether it’s cycling all or part way to work or doing some housework – can help make a difference.