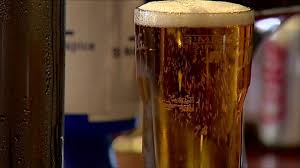 The poorest in society are more likely to suffer the health repercussions of excessive drinking, according to a new study.

Researchers found that heavy drinkers from deprived areas are at a greater risk of dying or becoming ill due to alcohol consumption.

The University of Glasgow study is published in The Lancet journal.

Its authors found a “marked link” between socioeconomic status and the harm caused by drinking excessively.

Compared with light drinkers in advantaged areas, excessive drinkers were seven times at risk of an increase in alcohol harm.
Binge drinking

This contrasted with excessive drinkers in deprived areas, who were 11 times at risk of an increase.

Harmful impacts of alcohol are higher in socio-economically disadvantaged communities.

The study finds that the poorest in society are at greater risk of alcohol’s harmful impacts on health, but this is not because they are drinking more or more often binge drinking.

Experiencing poverty may impact on health, not only through leading an unhealthy lifestyle but also as a direct consequence of poor material circumstances and psychosocial stresses.

The study looked at information from the Scottish Health Surveys and electronic health records, studying more than 50,000 people.

It defined harm from alcohol consumption based on deaths, hospitalisations and prescriptions that were attributable to alcohol.

And it suggested that even when other factors are accounted for, including smoking and obesity, living in deprived areas were consistently associated with higher alcohol-related health problems.

Heavier drinking is associated with greater alcohol-related harm in all individuals.

However, the study suggests that the harm is greater in those living in poorer areas or who have a lower income, fewer qualifications, or a manual occupation.

It is clear from official government statistics that the vast majority of people consume alcohol within the Chief Medical Officer’s low-risk guidelines.

The report shows that while consuming the least amount of alcohol, the poorest may suffer disproportionate levels of harm.

It is therefore important to understand how alcohol interacts with other issues associated with lower socio-economic status.

This will enable a sophisticated response that targets particular communities rather than heavy-handed interventions aimed at the whole population.