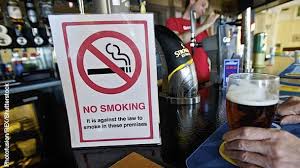 Deaths from heart disease and strokes caused by smoking have fallen dramatically since lighting up in pubs, restaurants and other enclosed public places in England was banned 10 years ago.

New figures have shown that the number of smokers aged 35 and over dying from heart attacks and other cardiac conditions has dropped by over 20% since 2007 while fatalities from a stroke are almost 14% down.
Smoking rate in UK falls to second-lowest in Europe

The statistics, which Public Health England (PHE) has shared with the Guardian, come as medical, public health and anti-tobacco groups prepare to mark the 10th anniversary next Friday of smoking being prohibited in indoor public places by Tony Blair’s Labour government on 1 July 2007.

The figures are proof of the ban’s huge beneficial impact on health. The law has played a key part in the huge cultural change we have seen in the past decade, especially among younger people, a change that has literally saved thousands from disabling chronic diseases and premature death.

The smokefree legislation has been extraordinary in the way we now experience and enjoy pubs, clubs, restaurants and so many other public places. It was undoubtedly the single most important public health reform in generations.

The decline in smoking-related heart deaths is especially significant because smoking still accounts for about one in every six deaths in England – about 79,000 people a year. Fatalities due to heart disease make up a substantial proportion of them. Smoking-related deaths are three times more likely to occur among poorer people than those from better-off backgrounds, research showed.

The Health Act 2006, which introduced the ban in England, was the first of 10 pieces of legislation over 10 years that have helped drive down smoking’s popularity to its lowest level ever. The numbers of people across the UK who smoke has fallen over the last year from 17.2% to 15.8%, according to the most recent figures from NHS Digital, published last month.

England was the last UK nation to bring in a ban. Scotland did so in March 2006 and Wales and Northern Ireland followed in April 2007. The Blair government initially considered exempting bars, private clubs and pubs where no food was served. But it instead decided to impose a blanket ban after MPs and doctors criticised the exemptions as unfair, unworkable and likely to harm the health of staff breathing in secondhand smoke in premises where smoking continued.

Cigarettes being stubbed out in public places, become far less visible in shops and had large graphic warnings put on packs starkly explaining what these things do to the human body – and all the misery and death they cause.

Its legacy has had a phenomenally positive impact on societal attitudes to smoking. Smokers have seized the opportunity by quitting in unprecedented numbers and of those still smoking, half have chosen to smoke outside their own homes to protect their families from secondhand smoke.

Although fewer people than ever still smoke, PHE is concerned that it remains much more common among certain groups, including younger women, and is a major source of health inequalities.
Smoking causes one in ten deaths globally, major new study reveals

For example, while just 10% of married people smoke, 21.2% of those who are single do so, as do 18.8% of those who have been widowed, divorced or separated. And while 15.7% of people who live with others smoke, 27.8% of those living alone light up. And the jobless, those in routine and manual jobs and those without a degree are between two and three times more likely than the employed, those in managerial and professional roles and graduates to use cigarettes.

The decline in deaths since 2007 from smoking-related heart attacks and strokes shows the effectiveness of a comprehensive approach by government to tackle smoking.

But there are still over 30,000 premature deaths a year from smoking-related heart attacks and stroke, and the government strategy for tackling this public health epidemic expired at the end of 2015. We need an ambitious new government strategy to be put in place immediately if deaths from smoking are to decline as fast in the next decade as they have in the last.