How Much Sleep Do Fitbit Users Really Get? A New Study Finds Out 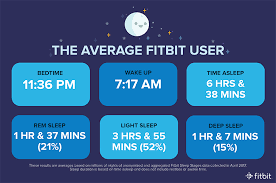 The launch of Sleep Stages was a huge step forward in sleep research – for Fitbit users and scientists.

Available on Fitbit Alta HR, Blaze, and Charge 2, Sleep Stages uses motion detection and heart rate variability to estimate the amount of time users spend awake and in light, deep, and REM sleep each night. The result? Data that empowers Fitbit users to take control of their sleep quality and allows Fitbit scientists to dig deeper into the health effects of sleep.

The ability to easily track your sleep not only helps individuals better understand their own sleep, it also unlocks significant potential for us to better understand population health and gain new insights into the mysteries of sleep and its connection to a variety of health conditions.

With that in mind, researchers tapped Fitbit’s longitudinal sleep database – the most extensive in the world – to analyze millions of nights of Sleep Stages data* to determine how age, gender, and duration affect sleep quality.

The sleep study results are below. Open up your sleep log in the Fitbit app to see how your personal stats compare.
The Sleep Sweet Spot

The average Fitbit user is in bed for 7 hours and 33 minutes but only gets 6 hours and 38 minutes of sleep. The remaining 55 minutes is spent restless or awake. That may seem like a lot, but itís actually pretty common.

Sleep is not completely still. It’s perfectly normal to have periods of restlessness  – 10 or even up to 30 could be normal for you.

That said, 6 hours and 38 minutes is still shy of the 7+ hours the the CDC recommends adults get. If you tend to fall short as well, try to bank those extra minutes: Fitbit data confirms that sleeping 7 to 8 hours gives you the highest combined percentage of deep and REM sleep. In fact, 7.5 hours of sleep is the point at which you typically start getting less percentage of REM and more light.

People who sleep 5 hours or less a night deprive their body of the opportunity to get enough deep sleep, which occurs near the beginning of the night. Deep sleep is important for many physical processes such as cell regeneration, human growth hormone secretion, and feeling refreshed.

Fitbit data shows waking up earlier than usual is what impacts REM sleep, which occurs more at the end of the night. Not getting enough REM sleep can negatively impact your short-term memory, cell regeneration, and mood.

Light sleep seems to act as a filler: You get more when you log less than 7 hours or more than 9 hours of sleep a night. And thatís not necessarily a bad thing – a lot of body maintenance happens during light sleep.

These findings further support the general recommendation that most adults need to consistently sleep 7 to 9 hours per night, and illustrate why a good nightís rest is so important for your overall well-being.

How Much Sleep Do Fitbit Users Really Get? A New Study Finds Out