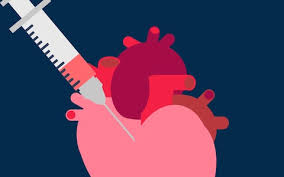 A new class of drugs which could prevent thousands of heart attacks and deaths from cancer has been hailed as the biggest breakthrough since statins.

Scientists last night said the discovery ushered in ‘a new era of therapeutics’ which work in an entirely different way to conventional treatment.

As well as cutting the risk of a heart attack by one quarter, the drugs halved the chances of dying from cancer and protected against gout and arthritis.

Cholesterol-busting statins are given to millions of adults deemed to be at risk of heart disease.

But half of heart attacks occur in people who do not have high cholesterol at all.

Now scientists have found that reducing inflammation in the body can protect against a host of conditions – with a ìreally dramatic effectî on cancer deaths.

The drug canakinumab, given by injection every three months – cut repeat heart attacks by one quarter. Statins cut the risk by around 15 per cent.

Experts said the findings have ìfar-reachingî implications for the 200,000 people a year in Britain who suffer a heart attack.
Statins
Statins are given to millions of adults deemed to be at risk of heart disease

And they called for urgent trials to further examine the impact of the medication on cancer.

Professor Paul Ridker of Harvard Medical School, presenting his findings at the European Society of Cardiology congress in Barcelona yesterday, said it opens up a ‘third front’ in the war on heart disease.

The landmark study tracked 10,000 heart attack victims who were given canakinumab, a drug which targets inflammation.

Typically, around a quarter of survivors will go on to have another event within five years, despite taking statins.

The four-year study found those given the new treatment saw a 24 per cent reduction in heart attacks and 17 per cent fall in angina, while those on the highest dose saw cancer deaths fall by 51 per cent.

Speaking at the worldís biggest gathering of heart experts, Harvard scientists said the approach promises to ‘usher in a new era’ of treatment.

These findings represent the end game of more than two decades of research, stemming from a critical observation: Half of heart attacks occur in people who do not have high cholesterol.

For the first time, the researchers have been able to definitively show that lowering inflammation independent of cholesterol reduces cardiovascular risk.

The findings had ‘far-reaching implications,’ opening up a new generation of treatment. In their lifetime, they’ve gotten to see three broad eras of preventative cardiology. In the first, they recognized the importance of diet, exercise and smoking cessation. In the second, they saw the tremendous value of lipid-lowering drugs such as statins. Now, they’re cracking the door open on the third era.

The findings were presented at the European Society of Cardiology Congress in Barcelona and published in the New England Journal of Medicine. Inflammation is one of the body’s natural responses to infection or injury. But it also plays a major role in causing heart attacks and strokes.

The findings are said to have ‘far-reaching implications’

Experts said high levels of inflammation were associated with a variety of conditions linked to ageing, including cancer, rheumatoid arthritis, osteoarthritis and gout – all of which reduced among patients put on the treatment.

The new treatment – which works by blocking part of the immune system called interleukin-1 – currently costs around £40,000 annually to treat a patient with the drug, compared to just £20 for statins.

But experts say the price would come down if widely adopted. And they said the cost would be offset by the millions of pounds saved from not having to perform heart bypasses and other major forms of surgery. Leading British medics last night hailed the findings as ‘exciting and incredibly important’.

The drug is likely to be given to patients alongside statins – in a ‘twin attack’ against cholesterol and inflammation. You need lots of bricks to build a wall – this is another brick in the wall. Nearly 200,000 people are hospitalised due to heart attacks every year in the UK.

Cholesterol-lowering drugs like statins are given to these people to reduce their risk of another heart attack and this undoubtedly saves lives. But we know that lowering cholesterol alone is not always enough. These exciting and long-awaited trial results finally confirm that ongoing inflammation contributes to risk of heart disease, and could help save lives.

The findings suggest that existing anti-inflammatory drugs, such as canakinumab, could be given along with cholesterol-lowering drugs to treat survivors and further reduce their risk of another heart attack.

Novartis, the company which produces the drug, said they now intend to apply for a licence for the treatment for heart attack victims, and to embark on a new phase III trial about the use of the drugs to protect against cancer.